A Lyrical Suite: Me and My Uncle, Mexicali Blues, El Paso, and Big Iron 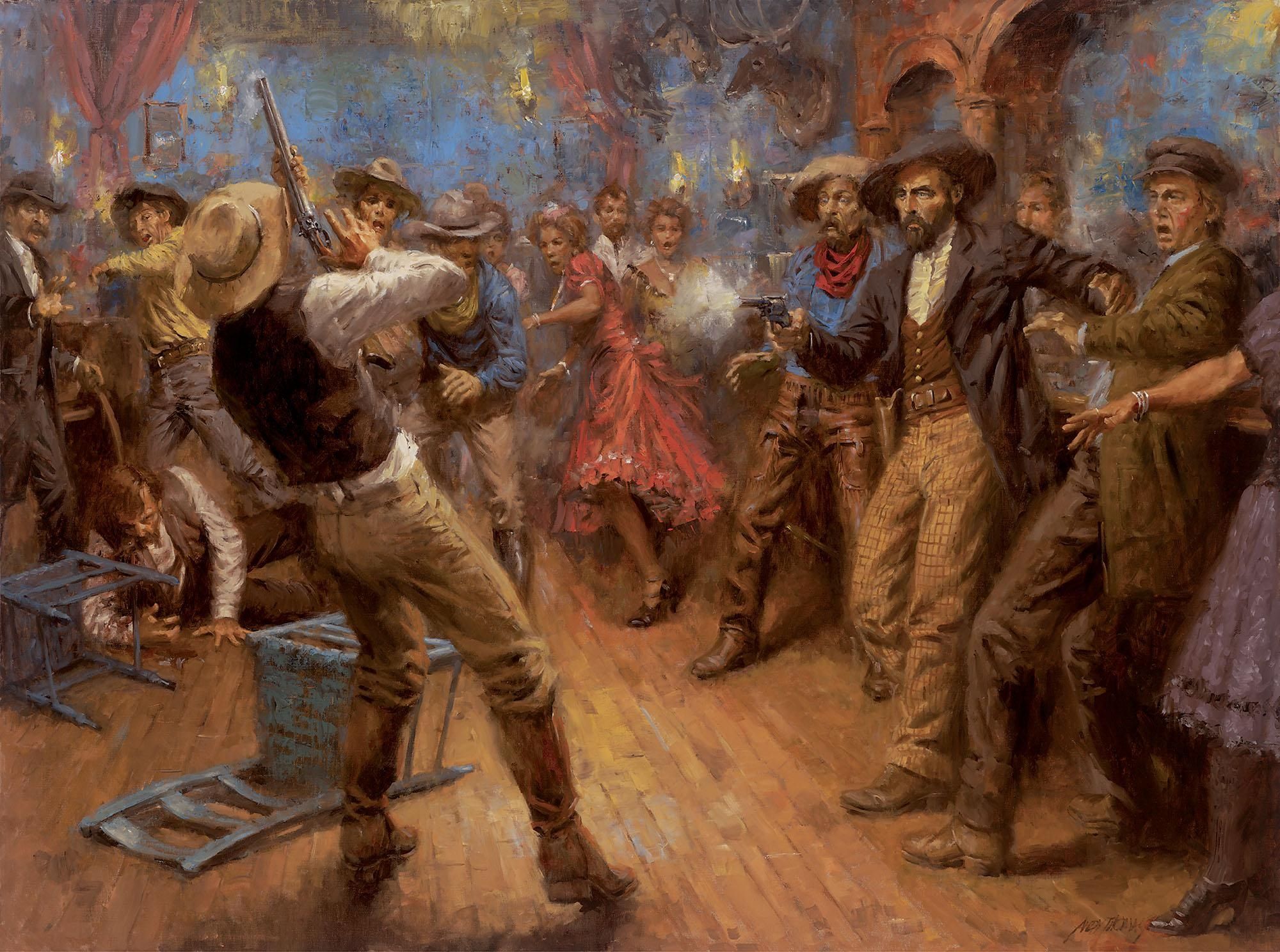 In the 1930’s and 1940’s, people were entertained by a new invention: the radio.  Programs such as The Shadow (“who knows what evil lurks in the hearts of men … the Shadow knows”) captivated families in the comfort of their home.  There were also old western programs such as Six Shooter, Gunsmoke, and Texas Rangers.  Back then, the days of the post-Civil War Wild West were only 60 years past.  That’s the equivalent of the 1960’s to us.

I submit to you that the songs Me and My Uncle, Mexicali Blues, El Paso, and Big Iron could be sections of a larger musical suite; one that tells an old Western story suitable for old time radio.  Pretend you are listening to an old radio program back in the 1930’s.  You turn the dial through the static until the program comes in clear.  The storyteller begins...

Chapter 1: Me and My Uncle

In the days after the War Between the States, many people left the east for the hope of a new life in the western territories.  Hope, however, often proved naught.  Lawlessness reigned.  In the southern lands of the Colorado Territory, what folks called “South Colorado,” the winters were long and cold and the summers were stifling hot.  Life could barely endure.

He was born in South Colorado.  Raised by his mother after his father left to join the Arizona Rangers.  His father had a brother who was not a God-fairing man.  It would only have been the boy's sixteenth year when his uncle came to town.  The man approached the homestead on a black horse.  Another smaller horse was tethered and followed, but its rider had fallen to the gun a week before.  “Mount up” ordered the Uncle, “It’s time you become a man.”  The boy mounted up without hesitation.  They rode south towards Santa Fe and were West Texas-bound.  It being summer,  the dry heat and dusty dirt spared none.

There was a small West Texas town just north of the big river that the locals called the Grande.  It was full of ranch hand cowboys and outlaws.  It was Saturday and the Uncle knew the hands were paid on Saturdays.  The boy took the horses up to the stall.  They went to the bar room and entered as strangers.   Eyes peered at them 'neath the brow, but the Uncle quelled the suspicion by ordering drinks for all.  Visions of women, liquor, and money were abound.  The Uncle sat down at a table to join a game.  At his deal he called, “High Low Jack and the winner takes the hand."  The game began, but one of the men sat motionlessly and stared.  He was not a ranch hand, but a Texas outlaw.  They called him Red.

After the Uncle won three in a row, a ranch hand cried “cheat!” and reached for his Colt.  The Uncle raised his hands with a surprised honest face. The boy quickly drew first and shot the cowboy down and then another ending that life before it could grow old.  In the confusion, the Uncle grabbed the gold and they both hightailed down towards Mexico.  However, during the gunfight, the outlaw Red sat at the table motionless with arms crossed and his eyes fixed on the Uncle and the young boy. Red did not know fear; only vengeance.

As they rode toward Mexico, the Uncle paused.  The spoils were too rich to share.  He slowly cocked his six shooter, but before he could turn, the boy shot him down.  He grabbed the gold and left his Uncle dead on the side of the road.

The boy knew he had to keep moving.  He was only three days ride to Bakersfield when he came to a town worse for wear.  There were flies and children roaming the dirty streets.  As he walked the dusty road, young black-eyed girls giggled when he smiled and a little boy offered to shine his boots.  The boy decided to seek board at a saloon.  He kept his gold hidden; only a peso in his hand did he show.  He traded that peso for a bottle.  When he lifted the brim of his hat to thank the bar keep, he saw her there.  She was fresh in town and spoke only Mexicali so he didn’t understand her name.  He called her Billy Jean.  She had raven hair, a ruffled dress, and a necklace made of gold.  And, she wore all the French perfume you cared to smell. They shared the bottle.  They also shared a room.

They boy knew, however, that the devil was on his trail.  Every time he closed his eyes, he saw the cold stare of the outlaw Red.  He knew Red would take everything, but the boy stayed idle with his raven-haired girl cherishing every thought keeping a tight grip on his bottle.

Indeed, Red and his posse came to town.  There was no sheriff.  Red's six shooter was the only law that dusty town knew.  Billie Jean alerted the boy to the danger of an outlaw at the door.  The boy shot first and killed him, however the outlaw did not have time to draw.  The boy knew that to kill a man who hadn't drawn meant to face the gallows.  So, he fled and left the raven-haired beauty in that dusty Mexicali town.

El Paso was the last outpost of West Texas.  When the boy came to town he found Rosie’s Cantina and quickly settled in.  Through the smoke filled room he watched a beautiful girl whirl to the music.  Her name was Felina and her eyes were black as night.  Some said that she could cast a spell with just one look.  His love for Felina was deep, but in the end it was in vain.

One night a wild young cowboy came in and he was wild as the cold West Texas wind.  He quickly took to Felina just as all who pass through do.  Rage burned inside the boy, and he challenged the stranger for the right to Felina's hand.  That challenge was answered and in less than a heartbeat, that handsome young stranger laid dead on the floor.

The stranger was not alone. He rode in Red's posse.  The boy stood motionless looking at the lifeless body shocked by the foul evil deed he had done.  Just then, Red kicked open the saloon doors; the boy had but one chance and that was to run.

He ran out through the back door of Rosie’s to the post where the horses were tied.  He picked a good one, at least it looked like a good one, and he climbed on its back and started to ride.  He rode west out of El Paso towards the badlands of New Mexico.  But, after he outran the posse, he turned around.  He longed for Felina. Nothing, not even death, was worse than the pain he felt in in his heart.  As he was back on the hill overlooking El Paso, the boy saw the front doors of Rosie's Cantina below.  He began his way down the hill to see his raven-haired love once more.

Just then, off to his right he saw five mounted cowboys and off to his left rode a dozen or more.  They were shouting and shooting and aiming to catch him, and the boy charged down the hill towards Rosie’s back door.  Just then, the outlaw Red took aim and let a fatal shot fly.  The boy felt a deep burning pain in his side and unable to ride, he fell.  Then out of nowhere, Felina found him. She was kissing his cheek as she knelt by his side.  The boy was cradled by the two loving arms that he had died for and with one little kiss, he said his good bye.

The outlaw Red fled El Paso.  He was wanted for the murder of that young boy who was no older than sixteen.  Red made his way to the town of Agua Fria in Arizona and there, they called him “Texas Red.”  Every man that tried to take him down wound up shot dead.  Texas Red was vicious and a killer.  Although he was only twenty-four, the notches on his pistol numbered one and nineteen more.

One morning a stranger rode into town.  He did not have much to say.  No one dared to ask his business, and surely no one dared to make a slip.  That stranger carried nothing except for a a big iron on his hip.  When the stranger started talking, he made it clear that he was an Arizona Ranger and had come to take down the outlaw Texas Red.  It did not matter if the outlaw left the town alive or was carried out dead.  When Texas Red heard the news, he paid it no lip.  He had taken down twenty men before and said, “number twenty-one would be the Arizona Ranger with the big iron on his hip.”

The morning passed quickly. At twenty past eleven, the Ranger and Texas Red met in the center of town. The townsfolk held their breath and watched from their windows.  They thought the Arizona Ranger would surely meet his death.  There was forty feet between the two.  Texas Red reached for his gun, but the Ranger’s draw was fast.  It was over in a moment.  Before Texas Red could clear the leather of his holster, the Ranger’s bullet lodged deep in his chest.  The Ranger’s aim was deadly.  He blew the smoke from the barrel and then holstered his big iron on his hip.

The Ranger stood over the dying body of Texas Red.  A lone buzzard soared above in the Arizona sky.  Texas Red choked as he gasped his last remaining breaths.  Before the end, the Ranger knelt down and whispered in Texas Red’s ear.  No one heard what was said, but when the wind howls through the center of that Arizona town some say you can her the voice of the Ranger whisper, “that was for my boy who I left long ago from my home in that small town in South Colorado.”